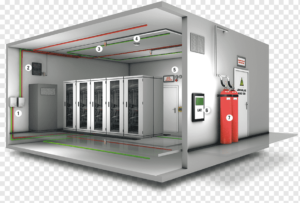 Image result for fire suppression system most commonly, a fire suppression system has built-in components that detect fires at the beginning stages through heat, smoke, and other warning signals. These are attached to an alarm system that will alert you when the fire has been detected and initiate steps for action to further suppress the fire.

These types of systems are in many ways, strictly superior to the water sprinkler systems of yesteryear. They’re extremely versatile, capable of extinguishing many different types of fires. They’re highly reliable, since they’re less prone to corrosion and damage than other types of systems.

And they don’t present any risk of water damage; the worst-case scenario is that you have a bit of debris to clean up after initial suppression agent deployment. We’ve also seen many new developments in the fields of modular and portable fire suppression systems. Old-school water suppression systems generally require a significant and early investment; because they rely on internal structures and plumbing, they must be installed during construction – or else, they’ll be cost prohibitive to install.

By contrast, if you have a totally modular or portable system, you can install it almost anywhere, at any time. This has made fire suppression systems much more accessible, affordable, and convenient.

All of which have unique properties and benefits based on the respective space in need of protection:

Gas suppression systems store fire-suppressing liquids, which are pressurized with nitrogen. These liquids contain a chemical agent called FM200, which is quickly released to immediately suppress flames. Since these systems don’t use any water, they’re particularly beneficial for rooms with large amounts of electrical equipment such as switchboards or server rooms. The gaseous agent is initially condensed in liquid form and stored in compact cylinders, making these systems easy to transport and store.

3M NOVEC 1230 fluid is one of the leading clean agents used for fire suppression. Clean agent fire suppression systems can put out fires safely without damaging electronic equipment or machinery.

Extinguishes fires by removing heat. All fires need heat, oxygen, and a fuel source to continue to burn. By removing any of these three elements, you can extinguish the fire. Other fire suppression agents, such as carbon dioxide, remove oxygen. But because the fluid removes heat instead of oxygen, it is safer to use in occupied spaces as it does not pose a suffocation risk for people

Carbon dioxide fire suppression systems are perhaps the oldest of the clean agent systems out there. CO2, as it’s usually referred to, has been used in systems since the early 1900s. It’s inexpensive compared to other clean agents and can be used in total flooding or local application.

The downside, though, is that carbon dioxide extinguishes by displacing oxygen and, in some instances, can create situations that can be instantly hazardous to personnel within the building. Therefore, it is not typically used for total flooding in occupied areas. When it is used, it is subject to several safety considerations. Carbon dioxide is used for industrial local application systems where the safety risks are manageable.

FM-200 Fire suppression system are designed for total flooding to protect high value assets Colorless and non-toxic gas, suitable for normally occupied area, where there is any chance of presence of human present

Used in suppression mode, operates in a fashion similar to other inert gas total flooding systems with the goal being to reduce

the O2 content of the protected space to the requisite combustion inhibition level.  The Fire PASS-Suppression system has the ability to extinguish all class A, class B and class C fires while offering added defense against re-ignition even in deep-seated fires.  This is all done with a level of respiratory safety unmatched by other systems.

The active oxygen reduction fire protection system prevents the development or spreading of open fires by adding nitrogen to the atmosphere.

Until recently, the focus was to discover a fire as quickly as possible and to extinguish it effectively.

Wet chemical foam systems are specifically designed for suppressing fires in kitchens. These kitchen fire suppression systems work by quickly emitting a water-based chemical foam agent directly into a small area. They are usually placed under the canopies of cookers and are activated by either a manual switch or a heat link (a link attached to a wire that breaks when exposed to heat, triggering the foam release valve).

Water mist systems pose a viable fire suppression solution for spaces that cannot be exposed to large amounts of water. They work by producing droplets that are much smaller than conventional sprinkler systems. This creates a layer of steam that starves fires of oxygen, quickly reducing the temperature of the affected area. Since they use much less water than traditional sprinklers, they can to some extent be considered a more sustainable fire suppression method. We explore water mist systems in more detail in our article on emerging fire protection technologies.

One of the biggest challenges in fire suppression is effectively safeguarding areas that contain flammable liquids. Foam deluge systems are the most effective means of controlling the spread of these environments. For this reason, they are commonly installed in refineries, aircraft hangers and industrial warehouses. A fire in these types of environments can accelerate tremendously quickly. Therefore, foam deluge systems are designed for the quick widespread application of suppressive materials.

Foam deluge systems use a mixture of foam and water to quickly control burning flammable liquids, cooling the surface area. The consistency of the foam causes a thick blanket to starve fires of oxygen and inhibit the release of flammable gases, effectively smothering the blaze. In this sense, they are not unlike conventional fire extinguishers.

Pneumatic heat detection tubes are designed in a way that makes them very similar to fire extinguishers. Therefore, they can be considered the most compact and mobile fire suppression system. These tubes have two primary components: a pipe and a valve. The pipe is installed around the potential source of fire; when it reaches a certain temperature it emits a suppressive agent directly onto the flames via the valve.

With the pressure of the extinguisher being low, it eliminates the risk of the cooking fats and oils being splashed around which could potentially cause the fire to spread or result in injury. Clean up after use is quick and easy.

Fire sprinklers use water to extinguish and control fires while commercial fire suppression systems Use a variety of non-water-based agents; both systems are commonly used together in different areas of a building,

Depending on contents and hazards.

Use a variety of non-water-based agents; both systems are commonly used together in different areas of a building,

Depending on contents and hazards.

Fire suppression systems are vital for preventing the spread of fire and protecting valuable business assets.

Suppression agents put out fires by eliminating heat or oxygen or by disrupting chemical reactions.

When the system activates, the agent travels from the cylinder to the protected space,

Either directly through the detection tube or through connected hoses and nozzles.

Warehousing And Storage – Storage facilities will usually make the most of available space, providing that it complies with workplace health and safety regulations. A fire suppression system would effectively manage the risk of having large amounts of potentially flammable goods in close proximity, and provide the amount of coverage needed to protect a large commercial space.

Data Centers And Server Rooms – After power supply issues, fires are the second most common cause for data center outages. They also have an average downtime of over 24 hours, and for the many businesses and organizations relying on data centers for their activities the impact can be catastrophic. Data centers and server rooms also contain a large amount of electronic equipment that is highly sensitive to changes in temperature. For both of these reasons, a fire suppression system is an imperative investment.